I’ve been asked a lot this week why I do not accept awards, I have also this week, been the recipient of a couple from fellow bloggers, so what better time to address the situation. 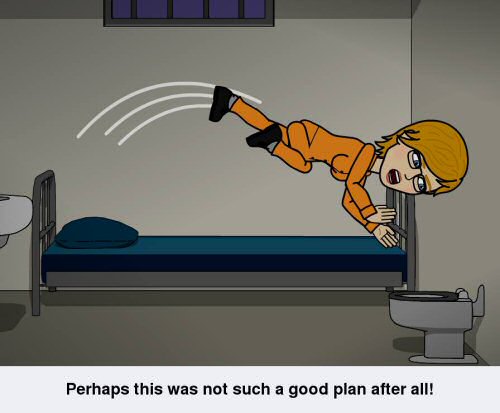 I was incarcerated once, there I said it. Phew, I’m glad that’s off my chest. Now before you panic, not in a real prison, but I was put in a detention centre by Akismet – The Spam Killers, it was a cold, dark and lonely place called ‘The Spam Folder’.

Back in the day before any of you knew me, in fact before anyone really knew me I used to get awards and would dutifully do all that was asked of me before passing them on, usually via a link on my intended recipients blog. Before long I started to run out of answers for the questions that were posed, and I also noticed that my comments were no longer showing on other peoples blogs when I stopped by. I figured at first that like me,  people had comment moderation turned on, but time passed and the comment was still no where to be seen. After a lot of head scratching I wondered if I had perhaps annoyed the entire blogging community and was being collectively shunned for my crime, hard for you to imagine I know, but yes I CAN be that irritating. I headed to the blogs of my two best friends knowing they would never desert me, ok hoping they never would, but even they had too. D I S A S T E R!

Eventually, with the help of Mr Google I was able to figure out that I had fallen foul of the filters on Akismet and due to the link posting for the awards, I had been banned for my crimes and branded as Spam. After about a month of pleading and begging people to release me I was finally freed and able to feel the sun on my face, or on my pages…..ahh whatever….I was free, and there I wish to remain.

I have not done awards since, I cherish being able to leave comments and interact with everyone. That however does not mean I am ungrateful, far from it, there is nothing better than knowing that someone liked you enough to put you on their list, it is praise indeed. In the act of doing so, they then introduce you to some of their friends and your little community grows, as far as networking goes, it is a useful tool, just be careful with the links.

Another thing about awards is the fact that you usually have to nominate a certain amount of people to pass the torch too. This used to cause me terrible problems, I hated leaving anyone out as each person who follows and interacts here is unique with different endearing qualities. When you love everyone equally it’s hard to make choices.

I know I’m not here as often as I would like, I’m trying to make changes to rectify this, but hang around, read the comments and interact, not just with me but with everyone who comments here, that’s what this blog is all about, community and hopefully it’s funny too. I have the best bunch of people that can be found on WordPress and there is always room for more, make yourself at home.

To the people who nominated me this week, thank you very much, please know that it is appreciated. Janey from Cupid or Cats is pretty famous in blogging circles so I am humbled indeed and the lovely Ritu from But I Smile Anyway labelled my blog as funny, you have no idea how ridiculously pleased that made me, because after all, that’s the name of the game.

All in all a good end to a pretty up and down week. Whilst looking particularly stressed after a meeting this week, my very nice boss asked if he could make me a cup of tea to which I replied, “I’m away for a smoke, I need nicotine, we’re well past the tea stage!

And on that happy note, till next time eejits!

The lovely Christine from Simpleek kindly nominated me for the “One Lovely Blog Award.” Many thanks, and I am humbled, it’s nice to know that someone out there likes my little space in blogsphere!

I’ve had a couple of award nominations and I have to be truthful and say that I have not done them all, mainly because I am still on Akismet’s umm I mean hit list from the last time I put links in comments. It took about a month and lots of begging people to drag me out of the trash and de spam me before I was back in good standing. It was a very traumatic experience….well ok it wasn’t really traumatic, but it was fecking frustrating! Those dark days are behind me, never to return.

So here are the rules surrounding the award:

The first four are no problem, I can do that, the 5th one however causes me a problem, what with my tenuous relationship with Akismet an all, so I’ve decided to conduct a little experiment. I’ll name the blog’s here and see how long it takes them to realise they have been nominated. It also lets me know if you read the whole post or if I bore you by the first line and you click the like button out of pity…I’m not complaining, a like’s a like at the end of the day and sometimes I am to be pitied, it’s not easy being an eejit! :)

Please don’t feel you must accept the award and follow the rules etc, I’ve put you here because I enjoy your blog and think it is indeed “One Lovely Blog,” I follow and read so many, it’s a hard choice, if you’re not here it’s because I am only allowed 7 nominations. If nothing else it is a blog roll of my current favourite blogs:

So there you have it. Christine, again, thank you very much :)

I think, I hope, well I seem to be Ham again.

I was able to comment this morning, and better still it actually showed up.

I haven’t however had an email from Akismet, so this may only be temporary. Fair play, it’s put a smile on my face this morning anyway.

Many thanks to those of you who battled the Spam Spectre on my behalf and rescued me from the Losers folder. It is much appreciated.

The rest of you, well you may still find some of my comments festering in the underworld, so there remains a little time to do your bit with regards to the preservation of my sanity!

I quite like being ham again, as long as I can get through the day without anyone trying to turn me into a sandwich!

I was getting a little bit paranoid.

Not the kind where I saw people wearing tan Mackintoshes and sunglasses duck behind trees and dustbins, but paranoid all the same.

Without my knowledge, I had become the lead character in “The Mystery of the Missing Comments.”

It started out harmlessly enough, I commented on a couple of peoples blogs. I’d never visited them before, so the fact that my comments didn’t show up was not all that strange. They, like me, may prefer to view all comments before they are published.

Another thing that lead me away from the scent was the fact that I was merrily rabbiting…umm…commenting away on my own site with no problems. Duh! I never even considered the possibility that this was because it’s my own site.

Today I commented and again it didn’t show up.  I thought, “Ok,” they’ve changed their settings as well, but when two further comments then appeared from other people, that quickly changed to “ah feck, have I offended them!” Two more sites and the same problem, so another change to “FFS the whole blogging community has barred me.”

As fast as my little fingers could type I directed my web page towards Geeky and Freaky and Purple Shirt Paul, there is no way my two best friends would abandon me, no matter how much of a pain in the arse I am, but sadly they had as well.

Sensing all was not right with the world I loaded up a search engine and typed in, my comments are not showing in worpress?

After a couple of minutes of reading I realised that I was not alone in this problem, it had happened before. I continued reading as my blood pressure slowly returned to normal.

Basically it looks like Akismet has taken a dislike to me for some reason and is therefore sending all my comments to your spam folder, well that’s where Lee found them anyway. I’ve e-mailed them and notified them of the problem. Apparently it’s quite common.

For those who liked reading my comments, I haven’t abandoned you. I was kidnapped by the Spam Spectre and we were loitering with intent in the losers folder. You can rest assured that the voice you heard calling “Hello, over here!” was not in your head.

If I promise to behave will you come rescue me?

Free The Geeky G4mer – Head over to your folder and mark me as NOT SPAM please, I’d be ever so grateful!